A few years ago I taught myself how to make scalers. I firmly believe the way I learned made me a better creator. The trial and error taught me so much more about using the Debug tabs than if I'd just read someone else's tutorial.

So, rather than just post a "How to make scalers" tutorial I'll share how I learned and hopefully it will inspire you too!

The way I learn most things is to take them apart and see what makes them tick, so I thought "What already has a scaler built in?" Answer: A head. So I opened a head and another similar product with no scaler and compared the Config, Mesh and Action tabs until I realised that the Debug tab had some different features in it.

Next was to understand how to transfer those features to a non-scaler item. This involved pressing the buttons until I realised what did what. There's only 4, Add Key, Add Data, Edit and Delete.

So far it's all been quite straightforward, if you can use a computer you can do it too. The next bit is where you'll need some help if you're not a mesher.

Basically you are scaling the invisible bones that are inside all IMVU avatars. What you'll need to know is the names of those bones so that instead of only being able to scale a head, you'll be able to swap "Head" for a different bone and scale that instead.

Below is the hierarchical table of bone names. The hierarchy matters because what you do to one bone will affect those further up that branch as well. To counteract let's say a foot getting bigger as well as the calf you meant to enlarge you would scale both and use, for example, a value of 1.5 for the calf axes and 0.75 for the foot's equivalent to balance each other out.


The next thing you are going to notice is that if you are scaling more than one bone you need a Mesh entry for each. Unless what you are deriving from has a lot in the first place you'll need to add some. The simple way to do this is copy the information in Debug 2 from "Mesh0" ... add extra keys and data as necessary, simply increasing the number of the mesh and index as seen in this example: 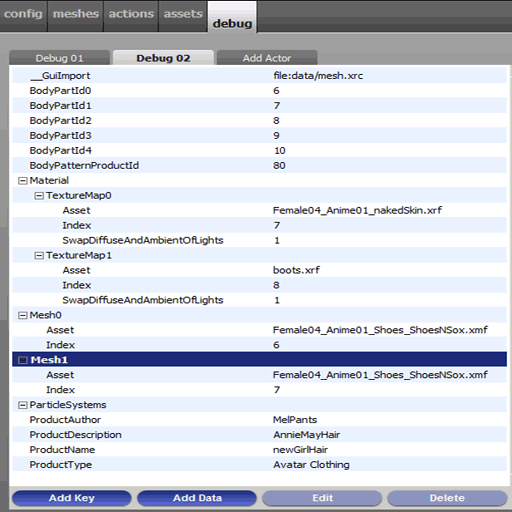 I just added a key named "Mesh1", then I made a data entry called "Asset" and copied the existing mesh name ... the "Index" then appeared and I merely changed it from "6" to "7" and now there is an extra space for adding scaler entries to another bone.


Please do give it a try and if you get stuck I'll try to help keeping within this thread's theme of self-education. It honestly is the best way to learn this stuff, it felt like quite an achievement when I figured it out and not many others had at that time. Who knows, with the way IMVU is going we might need to figure out a whole lot of other new stuff in the future and I hope trying this gives you the confidence to be an innovator in some new field or an existing one.